The recent spike in cases — 598 cases were reported Friday — make it a near certainty that the county will get knocked down to the most restrictive purple tier of the state’s economic-reopening roadmap next week, officials said.

“It’s not a record, but it pretty much puts a bow on it — we’ll probably be purple two weeks in a row. That ship has sailed,” OC CEO Frank Kim said Friday.

The number of county residents hospitalized with the virus decreased from 244 on Friday to 235, with 90 of those in intensive care, according to the Orange County Health Care Agency. As Thanksgiving Break Nears, Colleges Are Faced With Student Travel During a Pandemic 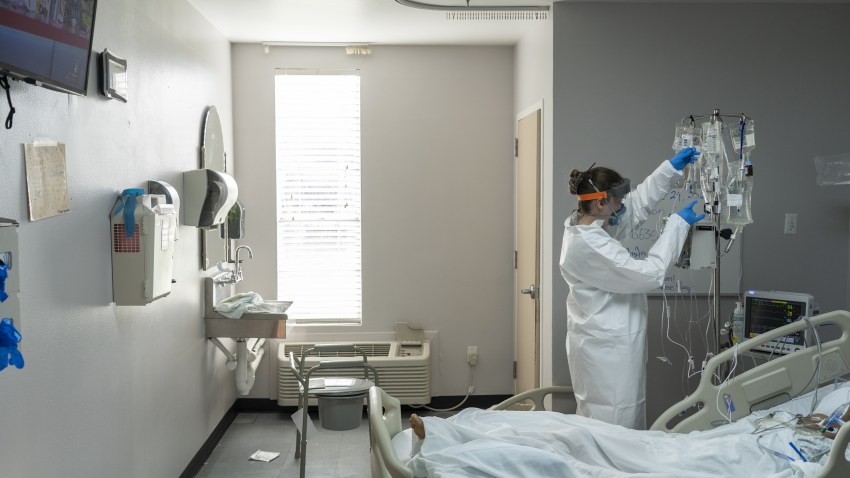 Both of Saturday’s fatalities were resident of skilled-nursing homes.

The change in the three-day average of hospitalized patients went from 17.3% to 8.5%. The county has 30% of its intensive care unit beds and 65% of its ventilators available.

According to OCHCA data, 1,242,434 COVID-19 tests have been conducted since the start of the pandemic, including 12,871 reported Saturday. There have been 56,154 documented recoveries.

The county’s positivity rate, which is reported each Tuesday, actually declined from 3.6% to 3.3% this week, and the daily case rate per 100,000 population decreased from 6 to 5.6.

The county’s Health Equity Quartile Positivity Rate, which measures a county’s response to virus hot spots, decreased from 5.7% to 5.5%. The county has to reach at least 5.2% in that metric to be upgraded from the red tier to the orange tier.

Orange County Board of Supervisors Vice Chairman Andrew Do said the county next week will announce a plan to provide coronavirus testing home kits to residents to help stem the tide of COVID-19.

The county has acquired 500,000 test kits that can detect coronavirus from saliva. Plans are to make them available at public libraries and city halls throughout the county, Do said.

“We want it to be mobile and at the neighborhood level, so people can see testing as part of their holiday safe practices,” he said. “Before you go see your grandparents, two or three days before you get tested, and after the family get-together, you wait two or three days and get tested again. Then that way you know going in or coming out of a get-together you’re safe and the people you are with are safe.”

Experts recommend the two- to three-day buffer because it can take that long before the infection is detected from a test.

“We haven’t worked through the protocol yet, but by next week we’ll have a program that will include locations that are easily accessible to people,” Do said.

The rise in cases is “alarming,” he said. “It points to a very difficult winter season coming up, and couple that with the holiday season and people need to be very vigilant.”

County officials will also soon issue recommendations on best practices for get-togethers over the holidays, which include dining outdoors and keeping the gatherings small in number, Do said.

“Make it a lunch thing where the weather is more tolerable,” he said.

Officials say the daily average of new cases would have to come down to about 130 for Orange County to make it to the orange tier, allowing for more businesses to reopen and for some already open to increase their capacity. But the county has to stay under 229 new daily cases to remain in the red tier.

Kim said it is growing more apparent the county will fall back from the red tier to purple. But there will be no changes in terms of capacity allowed in stores and other businesses right away, he said.

“You have to be in it for two weeks” before the restrictions are triggered, Kim said.

If the county remains in the purple tier as of Nov. 24, it would mean the restrictions would be implemented three days later. That means restaurants could still offer indoor dining for Thanksgiving and shopping malls would have the extra capacity for Black Friday shopping.

“The governor has done a good job of putting in that two-week requirement,” Kim said. “It gives you a week to have that discussion (with businesses)… Hopefully, it doesn’t come to fruition, but if it does, there will be no surprises.”

Schools won’t be closed, but there would be no new school reopenings unless they were able to acquire a variance from the county.

Among the businesses and institutions that would be closed for indoor activity would be churches, museums, zoos, aquariums, gyms, restaurants and movie theaters.